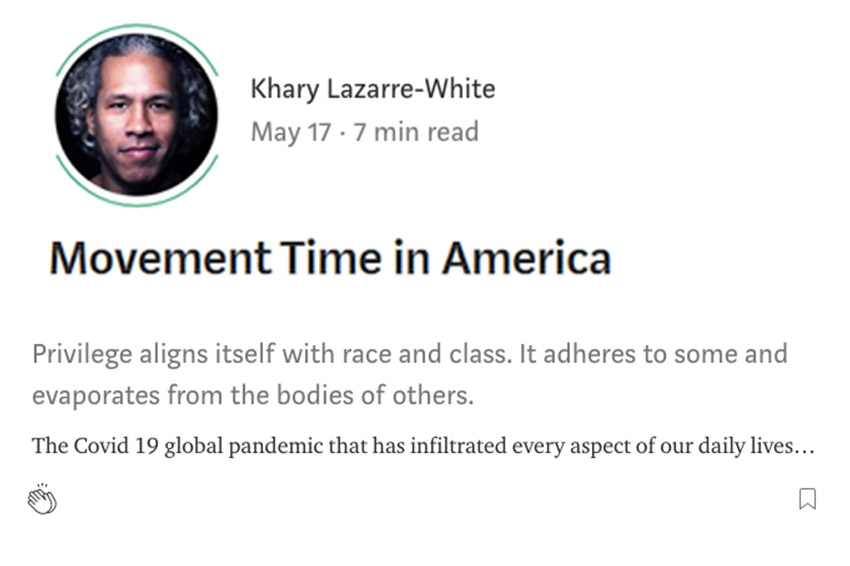 The Covid 19 global pandemic that has infiltrated every aspect of our daily lives, has also brought further into the light, for all to see, the gross inequalities of our nation. The profound racial and class disparities of deaths from Covid have been laid bare. Natural disasters and pandemics are unbiased in the destruction they can reap on the human body — all can die from sickness, rich and old, wealthy and poor, all races and nationalities and religions. But the lack of access to healthcare, pre-existing health conditions that correlate to race and class such as asthma, diabetes and high blood pressure, lack of healthy food, cramped and substandard housing that does not allow for the proscribed social distancing — all add to the tsunami of Covid. Privilege aligns itself with race and class. It adheres to some and evaporates from the bodies of others. The results are deadly. Power — politically and economically — serves to protect in a time of crisis. Those without access to such power are exposed to deal with and suffer from the crisis in deeply unequal ways.

I am the co-founder and Executive Director of The Brotherhood/Sister Sol, (Bro/Sis) this year celebrating our 25th year of existence. We are a social justice youth development organization providing deep and multi-faceted services and political education. We train educators across the nation on our model and work to change the conditions our young people are forced to endure — from educational disparities to economic poverty to an unequally applied justice system.

During this crisis Bro/Sis has had to deepen and expand our work. Due to economic poverty some of our youth have lost crucial part time jobs that previously paid for their phones and Wi-Fi, basic bills and food — and so we have provided emergency financial support to them. Others who have been asked to learn from home don’t even have computers or internet access. While New York City and Mayor de Blasio announced that the Department of Education would provide computers for the over 300,000 students deemed in need, after 6 weeks of expected remote learning, 200,000 had not yet received them. Thus children were asked to learn but could not access their virtual class rooms. In response, we have given laptops and hotspots to all of our young people in need. Overwhelmingly, the first to lose jobs in this crisis have been low wage workers — part time employees, support staff, retail and others who provide services. These are the kinds of jobs the parents of our young people hold. Or held. Their parents have lost their jobs, and bills cannot be paid, and food is scarce. In response we have provided, thus far, over 15,000 meals for our young people and their families.

Every Wednesday that we provide food to our young people and our community is a day that reveals with stark and unnerving reality the profound inequalities of our nation. Three of our staff rise early, rent a truck, and purchase thousands of dollars of food from a wholesaler in Brooklyn. They then drive this food — cases of 5 pound bags of rice, massive numbers and amounts of cans of beans, boxes of pasta, pasta sauce, canned fish, frozen chicken, pancake mix, cereal, bread and frozen vegetables — to our site in Harlem. There, 12 more staff are waiting to unload the truck and stack and order the food by type. Each week we also purchase fresh food from local farmers 90 minutes north of NYC in Kingston, New York — eggs, milk, apples, collard greens and kale. In addition, we secure donations from restaurants and a local nonprofit partner to augment what we have. Over several intense hours the staff works together, masked and gloved, to create over 600 bags for distribution.

Then our people come.

Over the weeks of the pandemic we have seen a great increase in the urgency and the desperation. It is palpable. Lines of our youth members and the community residents we have come to know over our 20 years on the block in Harlem where we are based — all standing six feet apart as they wait for several bags each to take home to feed their families. All on line are Black and brown, our staff work outside, ensuring social distancing is maintained, offering words of support and understanding in English and Spanish. The young people and elders, waiting patiently, express gratitude through masks — their eyes turning up in smiles, their words of connection and appreciation and love muffled though the cloth coverings. Our staff are giving out food — but they are also so excited to see the young people they are accustomed to seeing daily, children they have mentored to young adulthood. The joy and connection and sounds of greeting fill the air. A smaller number of youth are also picking up laptops, hotspots, masks and financial support needed for essentials. Our organization provides guidance, education, support and love for our youth members — it is our mission. All is provided this day.

The evening arrives, every single item is distributed, the three rooms, previously overflowing with neatly lined bags, is now bare. Staff speak of tired muscles from all the lifting — sadness from witnessing all of the need — but also of feeling affirmed from having done the work of providing, an abiding sense of community from having done this work together, and a resolve to keep doing so.

Budgets are moral documents. They are agreements that reflect priorities. The current budget proposed by Mayor de Blasio is 95.3 billion dollars. The Mayor has announced cuts of 75,000 youth jobs for those most in need and an increase in funding for the NYPD. NYS Governor Cuomo recently announced a state budget of 177 billion dollars. A decision was made whether to raise taxes on the wealthiest — 112 New Yorkers who are billionaires — or whether, during a health pandemic, to cut Medicaid, hospitals, home care attendants and nursing homes. He chose the latter. Neither has confronted the grossly unequal criminal justice system. America could comprehensively respond to the homelessness crisis for the cost of one aircraft carrier. In times of economic crisis the political leaders we elect make choices that determine who will survive and who will not.

Most of our young people tell us the greatest concern of their families is the loss of their home. That we as New Yorkers accept that over 10% of the children of this, the wealthiest city in America, are homeless, is a moral stain for which our leadership should be ashamed. Imagine being homeless in this pandemic. Imagine each and every morning worrying how you will provide a a home for your children. Imagine the terror. The fact that New York State has issued a moratorium on evictions is like providing only pain killers to the patient with cancer — it is insufficient and negligent. It does not treat the illness. If you have lost your job, if you are living in poverty or near the poverty line, as nearly one third of all New Yorkers are, then not paying your rent for three months — and then having three months of rent come due — is no treatment at all. You will not be able to make this payment and you will lose your home. The government has enacted necessary public health policies, but these preclude so many from earning a wage; they must also enact polices that protect peoples’ homes and provide basic access to healthcare and sustenance. To do otherwise is to abdicate one’s role as a political leader.

The Presidential election of 2020 will determine the direction of our nation — warring contrary ideals that speak to the soul of the country. Since its creation there has been a foundational struggle — choices between purported ideals and aspirational goals and the lived realities of bigotry, exclusion and an entrenched racial caste and class system. All too often the idealistic aspirations have been suffocated by the tangible actuality of oppression.

We will once again be confronted with a critical moment of reflection, a decision on the long winding path forward for our nation. It is one of those moments of specific choice and struggle. This is not just a decision of which party wins and whether we remove the disastrous and uniquely dangerous current occupant of the White House — the future of the nation demands that we do. For this pandemic has once again revealed the interconnected nature of our existence — the manner in which humanity is intertwined. The virus and the death it has reaped and the response to this scourge have respected no national borders. What will be our response? What is the human safety net we will choose? What are the priorities of this nation for its citizens, for its children? Will we choose a path that allows all to have sufficient food, to have a home, to have medical care that will protect and heal them when necessary, to have a livable wage, to face equal treatment under the law, to ensure all can vote, and to have truly equal access to information and education? It is upon us. It is movement time.