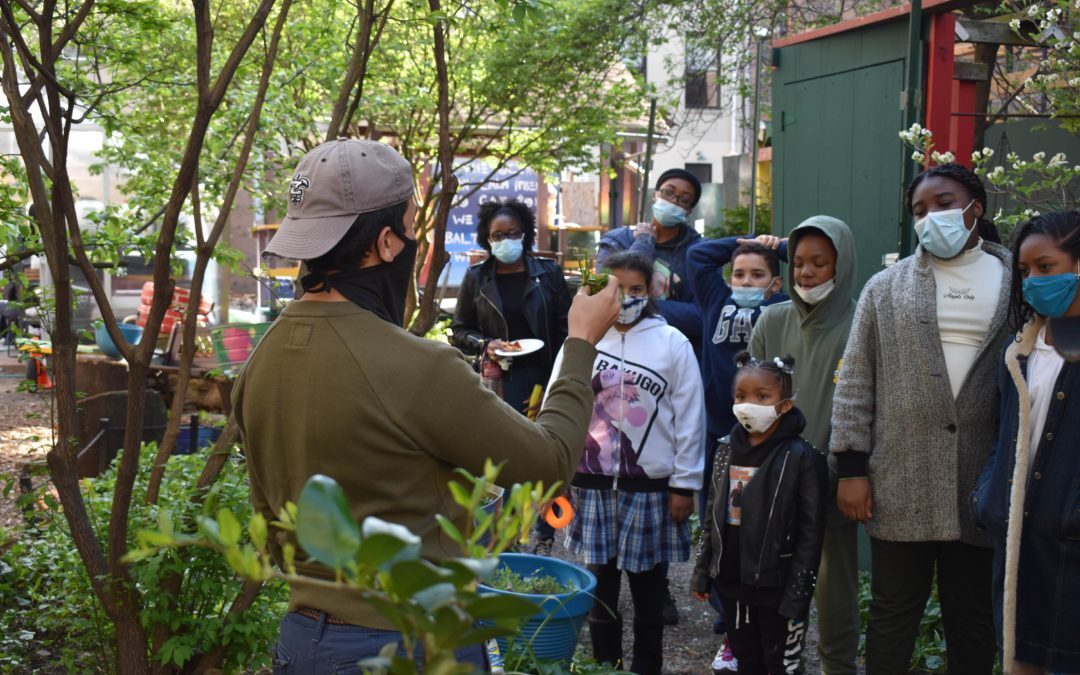 How One Organization Is Transforming Lives and Creating Young Global Citizens in Harlem.

The first year that high school students grow vegetables with the Brotherhood Sister Sol (BroSis), a nonprofit based in Harlem, New York, they’re often scared of bugs and don’t want to get their sneakers scuffed while digging in the dirt.

But by the second year they visit, some of them have a special pair of gardening shoes and gloves for handling worms, according to Nando Rodriguez, who oversees the Frank White Memorial Garden for BroSis.

“By the third or fourth year, a lot of them go off to college and they’re like, ‘I want to study environmental science or environmental law or engineering in the environment or city planning,’”
Rodriguez said.

That’s the sort of evolution that BroSis makes possible for young people who may be struggling at home or in school, opening their minds over the course of several years to their full potential and inviting them to be a part of a broader, global community.

Harlem has more concrete and asphalt than grass. The neighborhood faces environmental racism in the form of high levels of air pollution and exposure to industrial waste, hazards that can cause asthma, stunting, and other health problems in children. As climate change worsens, the neighborhood is heating at a faster rate than the rest of the city.

“Youth in NYC grow up within a concrete jungle,” the BroSis website reads. “From an early age their connection to nature is muted, and their understanding of the interdependence of all life is lost.”

In the garden, students learn the art and science of ecology and its benefits, how just being near trees and greenery can reduce stress and promote well-being.

Koemi Pena, a high school senior, said that she learned about food security and what makes up a healthy diet as part of BroSis programming.

“Before this, I didn’t know what a spaghetti squash was,” she said. “And they taught us how to cook it, and I want to learn how to do that with different types of vegetables.”

She helped build the greenhouse in the garden and regularly participates in local farmer’s markets. She’s learned how to cultivate different vegetables and herbs and how to cook them, too.

“I learned so much new information with BroSis,” she said. “And I don’t want to just keep that with myself. I want to branch out to others to help.”

It Starts With Community 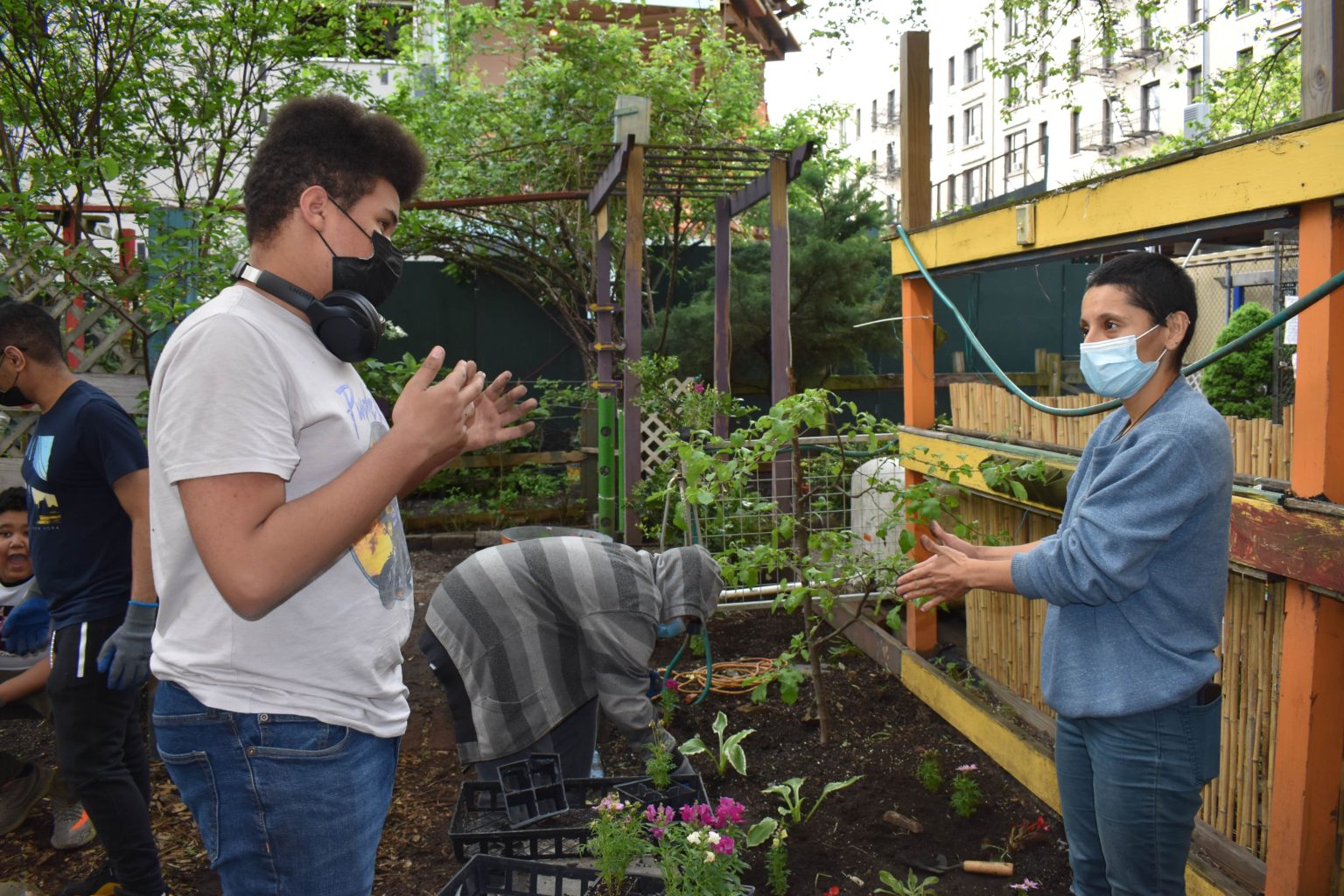 The garden is just one part of BroSis, but it’s emblematic of how the organization seeks to transform conditions of poverty and structural racism into vehicles for opportunity.

BroSis provides “wraparound” services to youth aged 8 to 22 in Harlem. That means surrounding children with opportunities for play, learning, skills development, personal growth, and mental and physical health. BroSis offers after-school programs and summer camps, home counseling and jobs training, community organizing opportunities and legal services. Students go on field trips abroad and to historical sites at home. They learn how to be vulnerable, how to express themselves, and how to support one another.

Programs are developed over time to respond to the changing needs of the community. Throughout the COVID-19 pandemic, for example, BroSis has delivered more than 550,000 meals and technology for remote learning to community members.

“We want a world where all young people have access to adequate housing, adequate schools, and health care,” Khary Lazarre-White, co-founder and executive director of the Brotherhood/Sister Sol, told Global Citizen. “There are basic things that people need to build stable lives, lives where they can then pursue their own dreams. A kid born in economic poverty should have just as much of a chance to succeed or fail. Their bellies and their minds should be full.”

While many after-school programs are isolated and temporary, BroSis tries to be there for young people throughout their entire childhood and beyond. Whenever a BroSis member is in need of help or guidance or is in trouble, staff members are there, Lazarre-White said, noting how community members often call BroSis instead of the police to deal with domestic disputes and other issues.

Police violence has been a menacing feature of life for Black communities since the founding of the United States. In New York, the racist history of programs like stop-and-frisk have left deep scars. Along with other community organizations, BroSis wants to build alternative models of community safety that pursue the utopian goals of accountability, healing, and restorative justice.

As the abolitionist and organizer Mariame Kaba argues, the foundation of real community safety is the type of work that BroSis has been doing for more than two decades.

Pena’s first experience with BroSis came when she was in elementary school.

“That program changed my life,” she said. “I was able to go to so many different places, all the retreats we’ve ever been to. It’s so empowering. It’s revolutionary. It’s basically my second home.”

What binds BroSis’ efforts together, Lazarre-White said, is its emphasis on political awareness. Kids are taught about world history and the structural forces that shape the present moment through “Rites of Passage” workshops.

“We’re opening their eyes to the community around them, teaching them about the issues around them, so they can understand where they were born and become changemakers,” he said. “We think that that work has always been central. The environmental justice movement, the women’s rights movement, the anti-war movement, those were all driven by young people who were politicized.

“And we cant talk about an intersectional approach to organizing today without looking to the black women organizing in the ‘70s, to Frederick Douglass speaking out against slavery and for the enfranchisement of women,” he said.

When members recognize their place in the arc of history and the power of community action, it gives them a sense of purpose, Lazarre-White said.

Since 1995, thousands of young people have passed through BroSis, and around 94% of alumni have graduated high school or received their high school diploma and 95% are either employed or in college — rates that are higher than the national average.

Rodriguez was part of the first BroSis class. He grew up in a single-parent household, the youngest of seven children. His family struggled with poverty and some of his siblings were unable to finish high school.

“For me it was exposure to a new way of life, it was a new lens, it was a sense of morality and ethics that made me want to treat everyone the way I wanted to be treated,” Rodriguez said. “Because of the lessons I learned through the workshops we went through, learning all the bits and pieces and putting it all together, I realized that humanity can only grow when people are good to each other and kind to each other and support each other.”

Early on in BroSis, he remembers being asked who his role models were.

“My chapter brothers were saying all these celebrities, and then they made us realize that we don’t even know these people, we don’t know if they’re good people at home, in their communities, all we know is that they’re skilled,” he said.

“It made me realize a lot of things. When I became a chapter leader, I started to express to young people that I led that everyone needs love, support, and a role model.”

BroSis put him on the path to studying environmental science at the State University of New York at Purchase College and becoming a horticulturist and park designer. When BroSis was granted the right to oversee the Frank White Memorial Garden, they called him and asked him to turn it into an urban oasis.

Now, the park has peach, pear, apple, and plum trees. It hosts strawberry, raspberry, and blueberry patches. Vegetable gardens burst with life, a pond teems with fish and turtles, and a greenhouse supports year-round food production.

On an average year, around 560 pounds of food goes into the community from the efforts of BroSis.

Rodriguez says that the community garden and its thriving ecology is a metaphor for the organization.

“You can plant a tree, but if you don’t nurture it, it’s not really going to grow,” he said. “It could fall apart, someone could take it out, but if you nurture it, as it gets bigger and stronger, then it can support others, and it becomes part of the environment.”