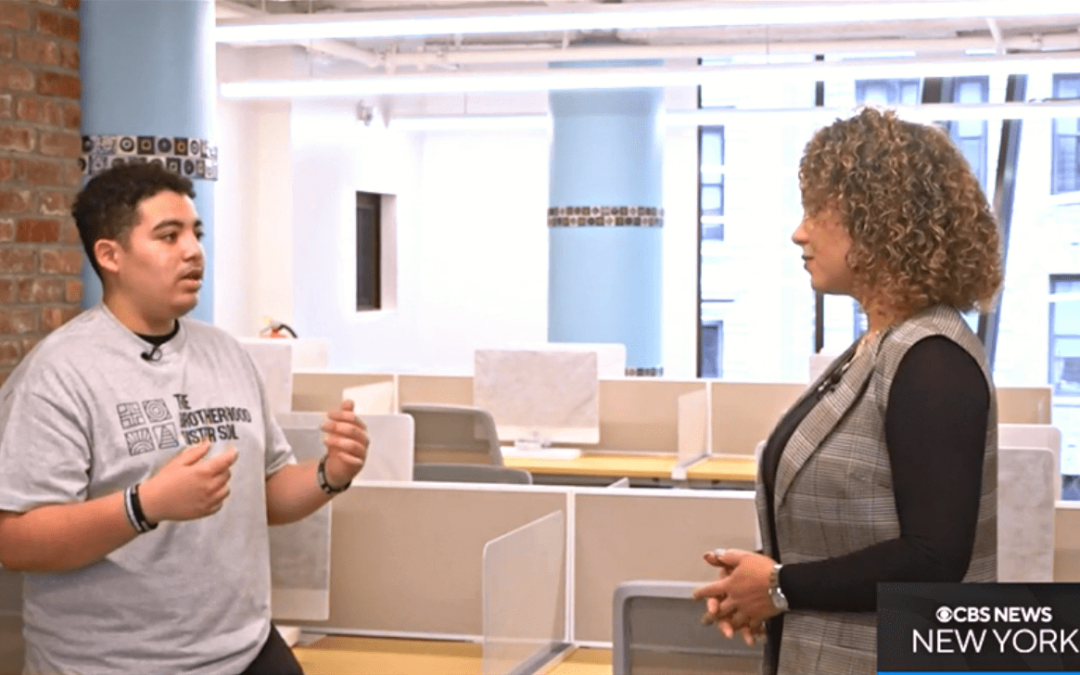 Check out this wonderful new feature from CBS New York highlighting our new building and our work to engage, empower and build new generations of leaders.

NEW YORK — A new community center for youth in Upper Manhattan and the South Bronx opens Friday in Harlem. The 22,000 square-foot facility is the new headquarters for The Brotherhood Sister Sol organization.

Also known as BroSis, The Brotherhood Sister Sol has been a fixture on W 143rd Street for 27 years, teaching kids financial literacy, social activism and the arts. Now the nonprofit has a facility that fits.

“When this project began, I challenged our architects from Urban Architectural Initiatives to design a building that’s about the enlightenment of children,” said BroSis Co-founder and Executive Director Khary Lazarre-White. “Architecture tells you things. It speaks to the value of what’s happening within that space.”

What is happening is metamorphosis, as told by 18-year-old member Matthew De La Cruz.

“Before I couldn’t care less, couldn’t really affect me,” De La Cruz said about the world around him, “but then you see that all these policies these politicians are making do affect you, just not directly. But sooner or later, they will.”

De La Cruz joined BroSis as a freshman in high school. That community got him through a pandemic, protests and puberty.

“We’re friends for life,” he said of his fellow members.

Chapter leader Dominique Mitchell felt the same way after she graduated BroSis, having had the opportunity to travel internationally for free and learn skills to help her succeed as an adult.

“Because of the relationships that I had with my chapter leaders, it inspired me to want to give back to my community, being that I grew up right across the street,” Mitchell said.

BroSis began in a century-old brownstone in 1995, but was bursting at the seams trying to provide for 500 young members and a growing waiting list by the time it was demolished in 2018. Lazarre-White said a member-painted mural showing enslaved Americans flying to freedom was the one thing they preserved.

“Our arts instructor figured out how to carve off the piece of sheetrock, and then we had it framed so the old building would be in the new,” said Lazarre-White.

The $20 million new building was made possible by private donors, government grants and the good will of the neighborhood. The new space includes a rooftop basketball court paid for by the Kevin Durant Charity Foundation, dance and art rooms, plus a Light Room that overlooks a thriving community garden.

Construction continued throughout the pandemic, all while BroSis operated on the corner of the block, providing more than one million meals to neighbors in need.

“We definitely want to light that fire within young people that they have to change the world, not in the future,” Lazarre-White said. “Not that old, tired adage of children are the future. It’s about the present. It’s about young people really transforming our society today.”

The Brotherhood Sister Sol will officially cut the ribbon on the new building Friday morning on W 143rd Street between Amsterdam and Broadway.