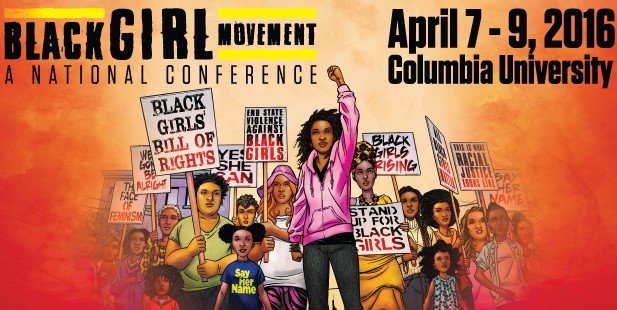 “Black Girl Movement: A National Conference” is a three-day gathering at Columbia University in New York City to focus on Black girls, cis, queer, and trans girls, in the United States. Bringing together artists, activists, educators, policymakers, and black girls leaders themselves, this first national conference on Black girls seeks to address the disadvantages that Black girls in the United States face, while creating the political will to publicly acknowledge their achievements, contributions, and leadership.

Black girls are among the most significant cultural producers, community connectors, and trendsetters, rarely are their contributions recognized or appreciated. At best, they remain invisible in our public discourse or people assume that all Black girls are doing fine and are “resilient” enough to overcome any structural obstacles put in their way. Nevertheless, the vast majority of Black girls in the United States are in crisis. They face significant barriers to educational achievement, economic and political equality, and are the recipients of deeply embedded racial and gender biases in the media, public policy, philanthropy, and research. The Brotherhood/Sister Sol is a proud Co-Sponsor of this national conference.

Today was opening day for the BroSis Green Youth M

Thank you @NYCCouncil @CMShaunAbreu @NYCSpeakerAdams for supporting The Brotherhood Sister Sol in the budget and the operation of our seven-week Summer Day Camp for youth ages 8 to 12, which provides an enriching and safe space for our youngest members during the summer.

This year's Sister Sol retreat theme was 'Metamorphosis' - describing the transformation our young people underwent the past two years. Our retreats are empowering spaces for our members to bond, explore, reflect, broaden their experiences, connect to nature & have fun. #brosis